What's the sound of a Frat boy Crying

Those of you familiar with my refrigerator's click, will be happy to know it's gone, not however before the refrigerator stopped working.  As a result when I got home from the week in NJ last Thursday night I was greeted to a fridge that was room temp. Which meant nearly everything had to go.

Fortunately since I travel all the time everything consisted of 2 shelves of condiments and spreads, and that's probably OK, I think I've had that ketchup since I moved to Chicago.

The part that was most depressing was the wast of alcohol.  Through various parties I had a decent stash of beer.  To be fair it's not like it was a artisanal collection that I'd spent hundreds on, and in fact I was never going to drink it, but it was good to know it was there when others came over and wanted a brewski.  So thanks to all the party goers late last year who stocked up.  But know the next time I'll really be starting from nothing.

I took a photo before dumping everything. 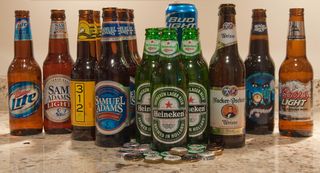 To be fair to GE I went online last Friday, scheduled an appointment for this morning between 8AM and noon, the guy was here by 8:15, and gone by 8:30, he spent most of his time pulling the fridge out and pushing it back.  The board went bad, he replaced it under warranty.  So I do appreciate the efficiency of the repair, however, I still think it's ridiculous that the board went bad in less than 5 years.

So kudos to GE for efficiently repairing and not charging, boo to the fact that their product went bad in such a short time, it's just as much companies, as it is consumers fault we live in such a disposable society.

I don't disagree, the food sucks, but seating gets a lot better, especially if you have a Red Carpet Club membership - and if you can to stay to one of the two B gate clubs, they're newly remodeled!
Mary Schmich: 10 ways O’Hare could be better - chicagotribune.com.