PACIFIC PALISADES -- Actor Peter Graves collapsed at died Sunday afternoon at his home in Pacific Palisades. He was 83 years old. Graves, who starred in "Mission: Impossible," "Airplane!" and Billy Wilder's "Stalag 17"-- apparently suffered a heart attack just a few days short of his 84th birthday, according to his publicist Sandy Brokaw. Brokaw said Graves had just returned from brunch with his wife and kids Sunday, and collapsed before he made it into the house. According to the publicist, one of Graves' daughters administered CPR but was unable to revive him. The family doctor reportedly visited the house and said he believed Graves had suffered a heart attack. The coroner was not investigating the death, and that there was no indication of foul play, according to Los Angeles Police Department officer Karen Rayner. Graves has appeared in more than seventy films, TV series and TV movies. He started his career humbly in exploitation films like "It Conquered the World," in which he battled a carrot-shaped monster from Venus, and "Beginning of the World," in which he fought a giant grasshopper. Graves later took on the role of agent Jim Phelps in "Mission: Impossible," with every episode beginning with him listening to a tape of instructions outlining his team's latest mission before the tape self-destructed. The show ran on CBS from 1967 to 1973 and was revived on ABC from 1988 to 1990 with Graves returning as the only original cast member. He won a Golden Globe Award in 1971 for his in "Mission: Impossible." He also received nominations for Emmy Awards and Golden Globe awards in other seasons of that show. In his later years, Graves made a move to television hosting, bringing his trustworthy and authoritative air to PBS' "Discover: The World of Science" and A&E's "Biography" series. Graves told the Los Angeles Times last year that he initially turned down the role for "Airplane!" because he thought it was in poor taste-- until actors Robert Stack, Lloyd Bridges and Leslie Nielsen signed on to the cast. "They say you are supposed to stretch as an actor, so let's go stretch it," he told The Times' Susan King. Friend and co-star Martin Landau released the following statement: "Peter was one of the nicest people on the planet. Working with him for those years on "Mission Impossible" is among the fondest memories of my life. He was not only extremely talented, but also completely unselfish and always prepared. Peter possessed a great sense of humor, but what impressed me most about him was that I never heard him say a bad word about anyone he encountered. I'd like Joan and the family and to know my deepest love, thoughts and feelings are with them in this hour of bereavement." Graves was born Peter Aurness in Minneapolis. He adopted his grandfather's last name to avoid confusion with his older brother, actor James Arness, who was well known as Marshall Matt Dillon on TV's "Gunsmoke." He was a champion hurdler in high school, as well as a clarinet player in dance bands and a radio announcer. After two years in the Air Force, Graves enrolled at the University of Minnesota as a drama major before deciding to follow his brother to Hollywood. When he became successful, he sent for his college sweetheart, Joan Endress, to join him in Hollywood. Peter and Joan were married in 1950 and had three daughters -- Kelly Jean, Claudia King and Amanda Lee -- and six grandchildren.

The original 'Grease' from Chicago - Who knew? And now, coming back. 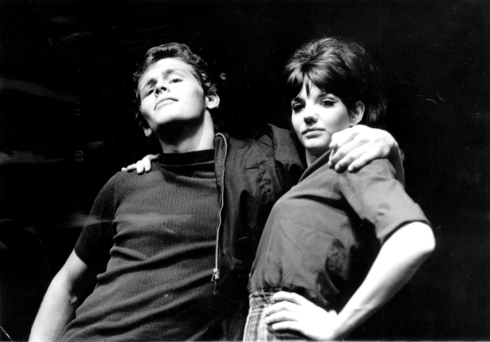 I had no idea 'Grease' was originally set in Chicago! Go Windy City!